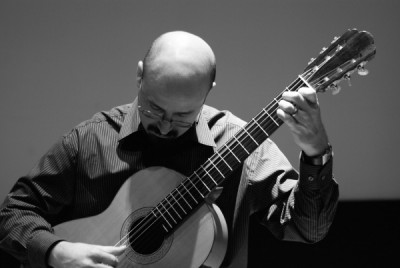 John Alvarado received his Bachelor of Music in Performance from DePaul University in Chicago where he was a recipient of the DePaul University Talent Scholarship. While there he was an active supporter of contemporary music, participating in the Chicago Young Composers Festival, Northwestern University New Music Festival, DePaul’s New Music program as well as co-founding New Media Productions, a performance art company designed to support, create, and provide a venue for modern performance art.

In 1998 he moved to Arizona to complete his Masters of Music in classical guitar with noted guitarist and instructor Frank Koonce at Arizona State University where he was awarded the Arizona Regents Scholarship. While there he continued to perform frequently as a soloist and as a member of the Alvarado and Saggers Flute and Guitar Duo. He continued his enthusiastic support of new music, placing 2nd in the Arizona State Contemporary Music Society competition in 1999. He also received the Mu Phi Epsilon music scholarship.

While in Arizona, Alvarado began to expand his study beyond the standard classical repertoire leading him to develop a repertoire of Latin American music as well as the study of Flamenco music. He has combined these with his classical studies to produce a broad range of concert music.

Alvarado is a regular performer in Indianapolis, having played at venues such as the Indiana History Center,  Indianapolis Art Center, Eiteljorg Museum of American Indians and Western Art, Indianapolis Artsgarden, IUPUI, and Butler University as well as numerous performances on the radio show, Indy Arts and Entertainment. In addition to his work as a soloist, he regularly collaborates with other performing artists including spoken word and dance performances. He is also a founding member and current president of the Indianapolis Society of the Classical Guitar. In 2008 he was awarded the prestigious Innovative Artist award from Indiana University for his work. In 2013 he was awarded a Creative Renewal Arts Fellowship by the Arts Council of Indianapolis.

Alvarado has performed in premiers of works by Sergio Assad, Dusan Bogdanovic, John Bauer, and Dave Burdick.  He has performed in Master Classes with Stephen Robinson, Eliot Fisk, John Duarte, and Javier Garcia Moreno.  In addition to performing, Mr. Alvarado is an active educator. He has taught for Arizona State University, Prescott College, Phoenix College, and Marian College. He is currently Trustee Lecturer of Guitar for the IUPUI Department of Music and Arts Technology.