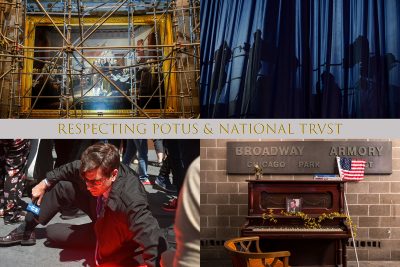 A two-person photography exhibition that explores the vital, acrimonious, and sometimes outright hostile relationship that has always existed between a free press and the halls of power within a democracy.

“Were it left to me to decide whether we should have a government without newspapers, or newspapers without a government, I should not hesitate a moment to prefer the latter.”

“Nothing can now be believed which is seen in a newspaper. Truth itself becomes suspicious by being put into that polluted vehicle.”

Both quotes are attributed to one of our founding fathers and third president, Thomas Jefferson, and they perfectly illustrate the vital, acrimonious, and sometimes outright hostile relationship that has always existed between a free press and the halls of power within a democracy. Traditionally the press, this fourth estate, has served as an additional check on the government’s power. In Seawell’s project, National Trust, he dissects the “careful manufacturing of appearances in relation to power, politics, and media in the United States.” His subjects range from historical structures to political spectacles and media culture, and they are all inextricably tied to superficial appearances and perceptions. Meanwhile, in Miller’s project, Respecting POTUS, he explores these appearances and perceptions as they relate to the Office of the President both inside and outside of the Beltway. According to Miller, “Political pundits, elected representatives, along with 24-hour cable news exist to hold those in power accountable but at times contribute to the divisive and hostile nature of our political culture today.”