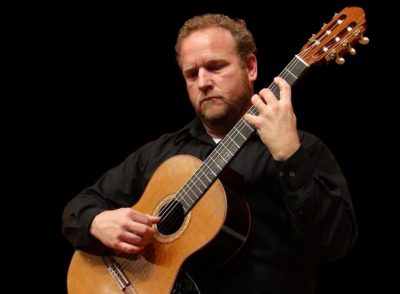 The Indianapolis Society of the Classical Guitar is pleased present Cain Budds in concert.

Cain Budds received the Doctor of Musical Arts degree in classical guitar performance at Arizona State University where he was a student of Frank Koonce. While in residence there, he served as a teaching assistant and faculty associate in the internationally recognized classical guitar program. In addition to his teaching duties, he assisted in the editing of the second performing edition: Johann Sebastian Bach: The Solo Lute Works, by Professor Koonce which was recently published by Neil A. Kjos company in San Diego.

He received his Bachelor and Master’s degrees from Illinois State University where he studied with noted performer and teacher Dr. Angelo Favis. Dr. Budds also studied guitar with Professor Manley Mallard III at Millikin University as well as with Dr. Douglas Rubio of the Crane School of Music, State University of New York at Potsdam.

Currently, Dr. Budds lives in Ruston, LA with his wife Monique, their four children, and two rather large and rambunctious dogs named Sally and Annie.

For more information on Cain Budds visit his website at: https://www.cainbudds.com

Tickets may be purchased at the door or in advance using our online store at: https://squareup.com/market/indianapolis-society-of-the-classical-guitar

Tickets available at the door. Doors open appx. 30 minutes before showtime. There will be a 15 minute intermission.