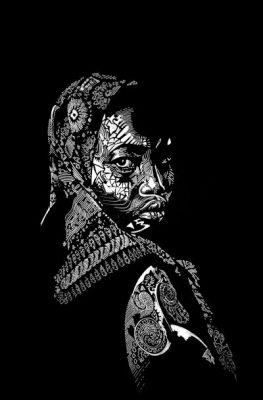 The simplest statement these works make is black faces are beautiful. Digging deeper, we see that by working on black surfaces with white ink & paint, Reynolds draws in the light instead of the shadow, with emotive figures emerging from the deep.

The simplest statement these works make is that black faces are beautiful. Digging deeper, we see that by working on black surfaces with white ink & paint, Reynolds draws in the light instead of the shadow, with emotive figures emerging from the deep, catching light in the way only melanin can. The stylized nature of the drawings reveals a complexity of shapes and linework, in patterns that evoke both ancient art and futuristic graphic design. The artist is also exploring his own ethnic heritage, examining roots he can only piece together, going so far as to trace his last name to the tradition of slaves taking on the surname of their master, in this case the RJ Reynolds tobacco fields. Prints will also be available of all work.
TJReynolds.net

TJ Reynolds is a multi-discipline artist and educator whose mission it is to spread the power of creativity and community. Visual artist, animator, director, M.C., producer, multi-instrumentalist and poet are just some of the creative avenues Reynolds travels on his exploits. As an educator, he has worked with thousands of students and adults in every conceivable setting; preschool through college, prisons and gifted schools, though his message remains the same; we must use art and expression to connect to each other and the world around us. Reynolds has been the recipient of numerous awards, including a Nuvo Cultural Visionary Award, Spirit of Herron (School of Art) Award, and the first ever hip-hop artist to be named a Creative Renewal Fellow from the Arts Council of Indianapolis. His music has been featured nationally on NPR, and he has won rap battles, poetry slams and a Moth Story Slam. This is Reynolds first solo art show.

As part of my We Catch the Light, Reynolds asked some prominent black Indianapolis poets & singers to select someone who was influential to them in their life. He will create a portrait of that person, and the guest artist will perform a piece dedicated to them at the opening Feb 7 for a unique, one time happening bringing poetry, song and visual art together.

Must request entrance to the gallery with attendant.