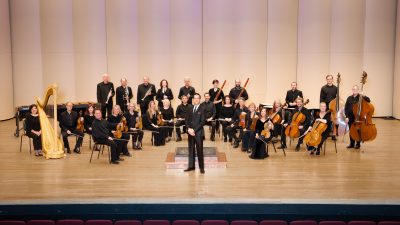 Comprised of 34 musicians, the ICO annually presents a seven-performance concert series. In addition to the series, the ICO provides orchestral accompaniment for many local arts and educational organizations. The ICO serves as Orchestra-in-Residence for the Indiana State University Contemporary Music Festival and annually conducts a national competition for the composition of new works. The ICO reaches over 30,000 people annually in central Indiana through its concert series, education initiatives, community partnerships, and outreach programs. The ICO is featured prominently in local media with its weekly Monday @ 10 pm radio broadcast on WFYI, 90.1 FM. Additionally, the ICO was featured on the PBS concert “A Festival of Carols with Sylvia McNair” and commissioned Peacemakers, the subject of an Emmy Award-winning PBS documentary in 2017.