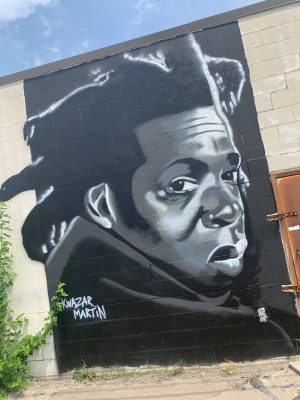 This mural is a portrait of rap mogul Shawn Carter, better known as Jay-Z. A Brooklyn, NY native, Jay-Z has been active in the national movement for better treatment of minorities by law enforcement and was instrumental in halting the “stop and frisk” policy by New York City police. His image is presented as an inspiration to the local community, who has similar concerns, to keep up their fight. The mural title is taken from one of Jay-Z’s songs.

Michael “Kwazar” Martin is an Indianapolis-based painter, muralist, and street artist. He is self-taught and counts popular culture, Black and African heritage, and sports among his artistic influences.