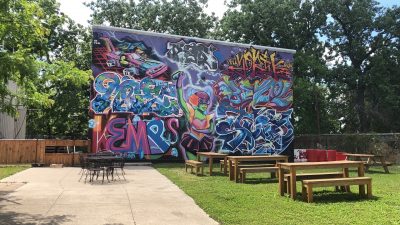 In June 2020, Rad Brewing had a Tag Days event at their taproom where a group of artists worked collaboratively on a 36 x 24 ft. mural on a side of the building as well as a few other smaller murals. The artists divided up the space and a couple of open spots on the taproom wall in order to add some art and support local art education. While the mural was being painted, the taproom also raised money from beer sales to go toward youth art programs in the Holy Cross Neighborhood.

Bezol One is an Indianapolis-based muralist and graphic designer inspired by futuristic technologies and exotic creatures. A graffiti artist at heart, Bezol One uses spray paint and acrylics to create bold visions of robots, animals, and more.

Stuffy, aka Kyle Rogan, is an Indianapolis-based graffiti artist, painter, and muralist.