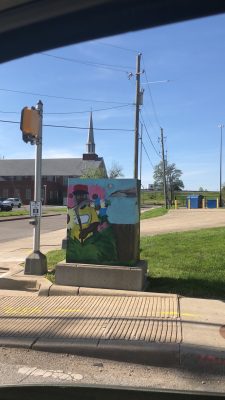 Ms. Jimmie Luton, one of the Greatriarchs, was an integral part of the Martindale-Brightwood neighborhood for as long as anyone can remember and was a friend and older mentor to many. Ms. Jimmie was well known for running a successful beauty salon in the neighborhood, named Jimmie’s, near this painted traffic box signal. In the mural, she is depicted as a gardener, a metaphor for her mentorship that nourished the neighborhood. Ms. Jimmie passed away in 2021, two years after this mural was created.

Indianapolis’ traffic signal box art program enabled neighborhoods to express their identity, beautify their streets, and discourage “tagging” vandalism of the neighborhood’s traffic signal control boxes (TSBs). The process was neighborhood-driven, with the Arts Council of Indianapolis assisting neighborhoods or other citizen groups by setting a common process, technical standards, and aesthetic guidelines; working with the Department of Public Works to reserve, permit and track the boxes used; and providing advice and support for finding and working with artists and then maintaining the TSBs once they are done.

Jamahl Crouch has been working as a freelance artist since he was 16. He takes inspiration from stories and people around him. One of his recent series portrays predominantly Black children as Kings and Queens in more modernistic regal outfits as a reflection on his own upbringing.