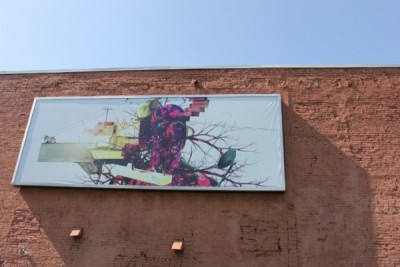 Artist Brian Priest’s interest in the areas of natural phenomena and interdisciplinary science have resulted in varied artworks comprised of sound, sculpture, performance and drawing. Often, the artist’s own body is both site and source of his work.

His prior piece Body Zoo resulted from the artist collecting samples of microscopic bacteria from different areas on his body to create a “micro zoo”. Images from Body Zoo were incorporated into Between Two Mirrors. Pictures of bacteria and mold were converted into texture maps to create an image which is both grotesque, compelling, and oddly beautiful. The image is a cluster of unlikely combinations of familiar elements, which exists somewhere between a clinical study, horror movie and architectural model.

Priest shows the human body as a structure that both navigates and contains landscape. Just as billions of humans inhabit the Earth, billions of small creatures thrive on and within us. It is life at different scales.