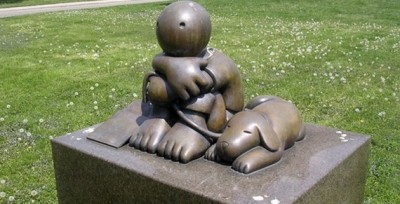 In April 2005, 25 bronze sculptures took Indianapolis by storm. The Arts Council of Indianapolis, with funding from the Indianapolis Cultural Development Commission created the city’s first citywide, temporary public art exhibition of internationally-renowned sculptor Tom Otterness. The exhibit, Tom Otterness in Indianapolis, was wildly popular and captivated the public’s heart. The whimsical figures dotted the downtown area, and like the city’s ever-expanding collection of public art, quickly became a part of life in Indianapolis. Tom Jones, a downtown resident who frequently toured the exhibit aboard his bicycle, decided to purchase "Boy and Dog." The purchase agreement stipulated the sculpture was to remain accessible to the public. So Jones, who lives in the quaint Chatham Arch, turned part of his yard into a public park. "Boy and Dog" is one of an edition of six.