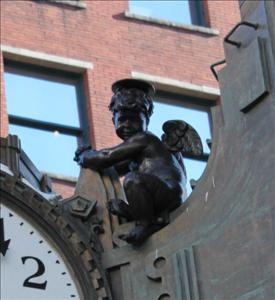 SW corner of Meridian and Washington Sts., Indianapolis, IN, 46204

Each year since 1947, a 3-foot-tall, 1,200-pound bronze cherub mysteriously appears atop the Ayres Clock the day before Thanksgiving and stays there until Christmas Eve.

The sculpture has its roots in drawings created for the 1946 catalog of L. S. Ayres, the city’s premier department store at the time. Advertising artist Virginia Holmes used angel illustrations to fill space in the somewhat sparse, post-war catalog and they became a hit. With its 75th anniversary approaching in 1947, the store commissioned sculptor and Herron School of Art instructor David Rubins to create the bronze sculpture. Employees unceremoniously placed the cherub upon their well-known clock at the corner of Washington and Meridian Streets on the day before Thanksgiving in 1947 and created a sensation that soon became a beloved tradition. Through the years, generations of residents visited downtown during the holidays to enjoy the store’s decorated Christmas windows and take a peek at the angel, especially since it was a tradition for shoppers to “meet under the Ayres’ clock.”

The Cherub has greeted holiday shoppers every year except 1992, the year L.S. Ayres closed permanently. When the department store closed, the cherub was moved to the new department store owner’s warehouse in St. Louis. After an anonymous group called Free the Cherub distributed “Free the Cherub!” bumper stickers, made hundreds of calls and sent letters to local newspapers, the cherub returned in 1993 and has appeared each year since.

Where the cherub lives during the rest of the year remains a mystery, and few know how the cherub appears atop the clock each year. In 2020 the cherub received a “spa day” to clean and repatinate it to its original brownish-bronze color.

Read more about the cherub here.

SW corner of Meridian and Washington Sts., Indianapolis, IN, 46204