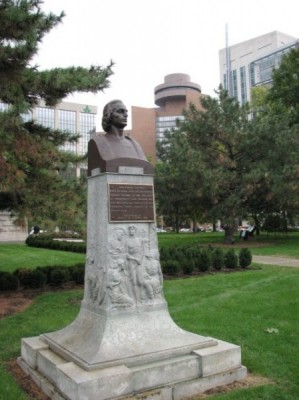 Below the bust is a granite pedestal with a plaque and relief carvings underneath. The carving on the front of the pedestal depicts a figure grouping with a man draped in fabric and wearing a crown of laurels standing in the center. His left arm is raised in the air and right hand rests in front of his waist. To the left and right of this man, three figures of Native Americans are featured, two of whom are kneeling before him; one on either side. The kneeling figure on Columbus’s left is a man, while the two figures on his right are women, one of whom is standing just behind his right shoulder. The relief on the pedestal’s proper right side depicts a seated woman with her right hand resting on her chest and left hand on a large anchor; her head is turned to her right. The relief on the pedestal’s proper left side is a profile view of a seated woman resting her right elbow on a globe. Below the relief sculptures, the pedestal slopes outward to meet a two-stepped granite base.

The plaque on the pedestal’s front states:
CHRISTOPHER COLUMBUS BORN IN GENOA, ITALY 1451. DISCOVERED AMERICA OCTOBER 12, 1492. THIS LAND OF OPPORTUNITY AND FREEDOM WAS THUS PRESERVED FOR HUMANITY BY THE PERENNIAL GENIUS ABIDING IN THE ITALIAN RACE. REFURBISHED BY KNIGHTS OF COLUMBUS 1956.

Metal lettering on the pedestal’s back reads:
ERECTED A.D. 1920 BY THE ITALIANS OF INDIANAPOLIS KOKOMO LOGANSPORT RICHMOND ETC.

A plaque on the pedestal’s back reads:
THE COLUMBUS QUINCENTENARY JUBILEE COMMISSION OF INDIANA INC., IN BEHALF OF INDIANA’S ITALIAN-AMERICAN COMMUNITY DEDICATES THIS PLAQUE TO THE CELEBRATION OF THE 500TH ANNIVERSARY OF THE COLUMBUS DISCOVERY OF AMERICA MAY THE GENIUS ABIDING IN THE ITALIAN RACE ENCOURAGE TOLERANCE AND ACCEPTANCE OF ALL CULTURES AS AMERICA’S ULTIMATE CONTRIBUTION TO HUMANITY.

Christopher Columbus was created by Enrico (Harry) Vittori, an Italian artist who lived in Indianapolis. Vittori attended the Florence Academy of Art in Florence, Italy and traveled to Indianapolis in 1919 to work for an airplane company. The sculpture was presented to the State of Indiana in 1920 by members of Indiana’s Italian community. It is the only monument at the Indiana Statehouse donated by immigrants, and it was intended by the Italians to be a tribute to America. The monument stood unchanged for 35 years. In 1955 the Knights of Columbus funded the cleaning of the bronze bust and the addition of new bronze lettering on the back of the pedestal.[5] The sculpture was modified again in 1992 during the Columbus Quincentenary, which celebrated the 500th anniversary of Columbus’s voyage to America. The Knights of Columbus installed a plaque bearing another statement about Christopher Columbus, bringing the total number of written statements on the pedestal to three.

Christopher Columbus was installed on the Indiana Statehouse lawn shortly after its completion and has not been moved or viewed in any other location. However, the initial proposal for the sculpture requested that the piece be erected in one of the Indianapolis parks, and the location of “University Square” was listed as a potential site for the monument.

Christopher Columbus was a gift from a group of Italian immigrants who lived in Indiana. It was commissioned with proceeds from a fundraising campaign lead by Vincent A. LaPenta, a surgeon and scientist who presided over the executive committee of Italian Propaganda. Indiana Governor James P. Goodrich dedicated the sculpture on October 31, 1920. LaPenta spoke at the dedication ceremony and stated, “Columbus can be considered humanity’s greatest benefactor.”

The sculpture is owned by the State of Indiana, Department of Administration.