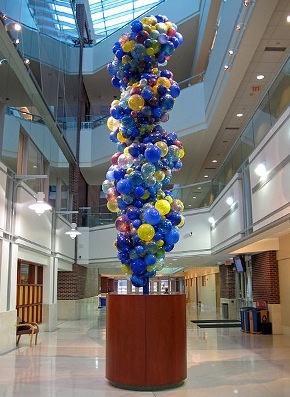 The sculpture is a symbolic, rather than accurate, representation of Deoxyribonucleic acid, (DNA), the blueprint of life. DNA is a double-helix molecule, and its distinctive shape is often described as a twisted ladder. The outside of the twisted ladder is composed of sugar and phosphate groups, while the rungs, or steps, of the ladder are formed by two nucleobases connecting to each other via hydrogen bonds. The sculpture is composed of 1,200 blown-glass globes and weighs a total of 3,000 pounds. Each globe has a different texture and weighs between 1 and 2 pounds. The mauve, green and blue globes represent the four nucleobases, while the yellow globes represent the double helix, or sugar and phosphate group, to which the bases are attached. The glass is held in place by a steel armature that is painted blue. The base support of the sculpture is surrounded and protected by a 5′ tall circular cherry wood base that is 5’5" in diameter. DNA Tower was commissioned to commemorate both the 100th anniversary of the IU School of Medicine (founded 1903) and the 50th anniversary of the discovery of the structure of the DNA molecule (discovered 1953) by 1950 IU alumnus James D. Watson and his colleague Francis Crick.