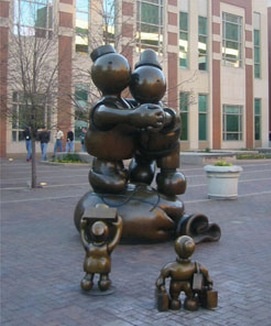 The satirical pieces “Free Money,” “Male Tourist,” and “Female Tourist” depict tourists taking photographs and a couple dancing on a bag of money. Deputy Mayor Steve Campbell said at the dedication ceremony, “This artwork is a great legacy for the city. The sculptures will be constant reminders of two sectors of our economy that are extremely important to our city, the arts and tourism. Plus, they’ll be great ambassadors to the thousands of visitors who come to Indianapolis every year.”

These sculpures were part of a city-wide exhibition supported by the Indianapolis Cultural Development Commission, the Arts Council of Indianapolis, the Deborah Joy Simon Charitable Trust and Marlborough Gallery. The 25 works were on display in public spaces throughout downtown Indianapolis from April 15 through October 1, 2005. Tom Otterness in Indianapolis represented the largest public art exhibition to ever be hosted in the Indiana capital. It also brought the world-renowned artist from Kansas back to his Midwestern roots. Prior to Indianapolis, Otterness showed the work in the highly successful, Tom Otterness on Broadway, which spanned five miles of New York City’s Broadway. New York City extended the exhibition for four months due to popular demand. The show traveled directly from New York City to Indianapolis in mid-April, 2005.

“We pursued this blockbuster exhibition for Indianapolis because Tom’s original style and humor makes the art appealing to a wide variety of audiences,” said Greg Charleston of the Arts Council of Indianapolis. “We’re honored to be the only city besides New York to host the exhibition. There’s no better time for it in Indianapolis because this year marks a unique point in our city’s growth. Never before have we had so much investment at cultural institutions come to fruition in one year and so many prestigious national arts-related conventions meeting here,” said Mayor Bart Peterson.

Considered one of the premier public artists working in the United States, Tom Otterness has exhibited widely and completed commissions in the U.S. and abroad. His stylized bronze figures combine into sculptural ensembles that explore the range of human experience, from grand ambition to common foibles, plucking imagery and themes from popular culture and subtly transforming them into humorous commentary. “I’m looking forward to seeing if the works will take on a new meaning as they move from New York to Indianapolis,” said Otterness. Tom Otterness in Indianapolis included Marriage of Real Estate and Money, Educating the Rich on Globe as well as more recent works such as Free Money and Mad Mom that draw characters from fairy tale and myth.

Reflecting the artist’s use of scale to establish complex relationships between his sculpture and their surroundings, the featured work ranged in size from Fallen Dreamer, which measures a mere 30 inches tall, to Escaping Leg, standing over 20 feet tall. Many of the works displayed in Otterness in Indianapolis were featured in Tom Otterness on Broadway; four works, Computer Pile, Tree of Knowledge, Male Tourist and Female Tourist were included in the show for the first time. Male Tourist and Female Tourist came from Tom Otterness’ personal collection.

Visit Otterness’ website, regarding the Indianapolis exhibition of his work: www.tomostudio.com/exhibitions_indianapolis.html