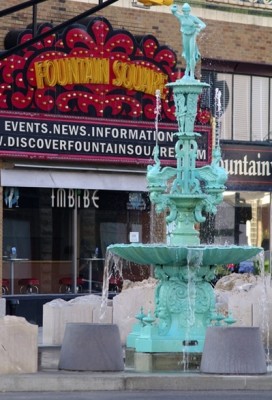 This fountain is the fourth to have existed at the intersection of Virginia Avenue, Prospect Street, and Shelby Street. The first was a classical design with drinking places for horses and humans, surmounted by a cast iron statue of a seminude figure of the goddess Hebe, nicknamed “Lady Spray.” It was erected in 1889 and paid for by Fountain Square business owners. The second fountain was commissioned in the early 1920s, and was dedicated in 1924 as a memorial to former Indiana Congressman Ralph Hill. The bronze sculpture – titled “Pioneer Family” – that topped the fountain was created by Myra Reynolds Richards. Richards was a nationally recognized artist, and at the time of the commission, was an instructor at the John Heron Art Institute in Indianapolis. The sculpture was moved to Garfield Park in 1954; public pressure secured its return in 1969. The third pedestal, base, and fountain were installed in the 1980s. The current fountain was installed in 2009 and dedicated in 2010. The cast iron fountain is taken from molds made from a historic fountain in Watertown, NY, and is topped by another version of Hebe. “Lady Spray” has returned to Fountain Square!