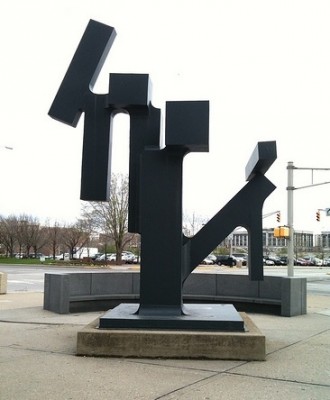 Quaestio Librae (A Question of Balance) was an abstract, geometric public sculpture by American artist Jerry Dale Sanders, formerly located on the south side of the Indianapolis City–County Building. It was a metal sculpture, by the end of its life painted a dark charcoal-gray, consisting of nine rectangular forms attached to each other in a composition that makes them seem both solid and weightless.

The title derives from the placement of the sculpture in front of the building where most city government functions take place; although it is an artwork of pure form, one interpretation is that it serves as a reminder to city officials to continually think about what they are doing and work to balance the needs of governing with the needs of the people governed.  The sculpture is important because it was the first contemporary-style sculpture to be permanently installed in downtown Indianapolis.  Sanders was an Indiana University M.F.A. student when he proposed to create the sculpture at his own cost if the City of Indianapolis would agree to own it after he was done.  The process of raising cash, finding donated materials, designing and fabricating the sculpture, obtaining permissions, and installing the sculpture was his thesis project.  It was not completely installed until after he had left school.

The piece was de-installed in 2017 as part of the renovation of the City-County Building Plaza into Lugar Plaza. Due to its state of disrepair and the expense of restoring it, a decision on whether to reinstall it elsewhere was tabled.  In 2019, artist Nina Elder reclaimed the history of the sculpture as well as its metal as part of her commissioned neo-monument called The Score, fashioning the pieces into metal quarrying tools that she handed out to community members as a symbol of the change they were making in the community.  The community members were invited to use the tools to mark the limestone element of The Score when they felt they had made a significant impact, over time destroying the limestone as the community changed.

For more information about the artwork, visit http://en.wikipedia.org/wiki/Quaestio_Librae