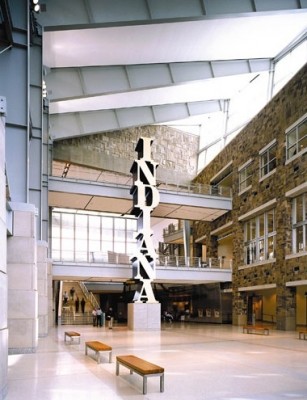 Within the Indiana State Museum is the Governor Frank O’Bannon Great Hall, featuring a soaring 100-foot ceiling and the Indiana Obelisk sculpture, created in 2002 by the Hoosier-born artist, Robert Indiana (born Robert Clark).

The sculpture stands just under 50 feet tall and sits on a five-foot-high base.  It is the largest work of art the artist ever fabricated. Upon being awarded the commission, Indiana chose to highlight both the name of the state and the state’s colors, which he felt was only logical. He liked the result so much that he asked that his final resting place be under the sculpture; however, the state denied the request after due consideration.

The date the sculpture was dedicated–April 9, 2002–was declared Robert Indiana Day by then-governor, Frank O’Bannon.

Robert Indiana was internationally known as a printmaker and sculptor, and was a key figure in the Pop Art movement of the 1960s.  His famous LOVE design, which exists in a number of flat and sculptural incarnations and in a variety of languages, was originally designed in 1965 as a Christmas card for the Museum of Modern Art.  Indiana died in 2018 at his home on Vinalhaven, Maine.