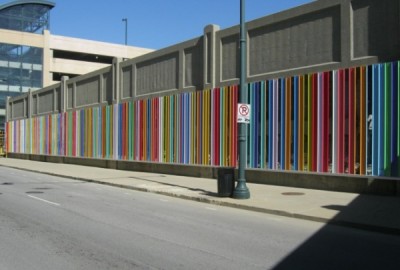 Bright City is a 12 foot tall polychromatic artwork painted on panel with mirrored strips. This 171 foot long mural is comprised of mirrored stainless steel lined between color fields painted with marine grade acrylic paint. This mural enlivens the sidewalk beneath it with stripes of reflected light.
This mural brings a modern, cheerful, and welcoming tone to its portion of Delaware Street. It connects, literally and figuratively, the contemporary arts sensibility of the Alexander Hotel with the high-spirited activity at Bankers Life Fieldhouse. The mirrored surface reflects the motion of pedestrians, cyclists, and motor vehicles. It reflects the changing light both day and night, and the city skyline as it grows and changes.

As a contrast to the long horizontal wall on which it is mounted, the vertical stripes of Bright City lead the viewer’s eye up. The rhythm of its colors and reflection draw pedestrians along the length of the work. Passing form one end of the mural to the other, the stripes appear as narrow strips gradually expanding into fields of color.

Bright City is designed to be appreciated in transit, from one end to the other, in all types of light and by a wide audience. It is a different artwork depending on where the viewer is positioned, the time of day, and the weather – glinting in the daylight, coolly gleaming on cloudy days, or catching nighttime light from surrounding signage and street lights. Bright City signifies optimism, modernity, and strength – features shared with the city of Indianapolis itself.

Shawn Causey is an Indianapolis-based visual artist and musician with a studio in the Stutz Building. Causey earned degrees in fine arts from Herron School of Art & Design and in music from Butler University. She was assisted on this project by Indianapolis contractor, Mark Daniell.

This artwork was deinstalled in November 2015 to facilitate new construction on the site.  It will be relocated to a new site within the CityWay complex in 2017.

Funding for this mural was provided in part by Buckingham Companies and the Arts Council of Indianapolis.