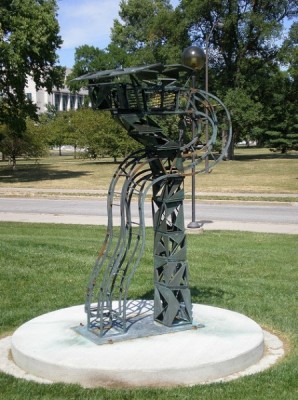 Reunion was created in 1992 as a model for a larger Reunion sculpture now located in Kitakyushu, Japan. Originally made in balsa wood and foam core, it was later cast in bronze.

Originally, Reunion was located outside of the Indiana State Museum when the Museum was located at 202 N. Alabama Street, Indianapolis. The sculpture then moved to the original Herron School of Art location at 16th and Pennsylvania in Indianapolis. When Eskenazi Hall for the Herron School of Art was constructed in 2005, Reunion was then moved to the grounds of the new building. It is no longer on view, and was replaced by Gummer’s South Tower sculpture.

Don Gummer was born in Louisville, Kentucky on December 12, 1946. He attended Herron School of Art from 1964 to 1966, prior to attending the School of the Museum of Fine Arts, Boston. He also attended Yale University, where he received his BFA and MFA. Gummer, who is married to the actress Meryl Streep, currently lives in New York with his wife and children.