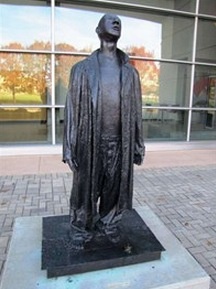 Job is a bronze sculpture, created by American artist Judith Shea. It is located on the Indiana University-Purdue University Indianapolis (IUPUI) campus in Indianapolis, Indiana. The piece was created in 2005 and placed on loan at Herron School of Art and Design for the school’s first Public Sculpture Invitational, held between May 2005 and August 2006. In 2008, Herron acquired Job and it was acquired with financial support from Jane Fortune, Dr. Robert Hesse, William Fortune Jr., and Joseph Blakley.

Job is a single standing bronze figure placed at the Allen Whitehill Clowes Pavilion main entrance of Herron School of Art and Design, just off of New York Street. Job portrays a bald man looking upward while wearing a long open overcoat. The figure is shirtless with his palms facing outward. It is likely that this figure represents the Biblical character Job, who is the central character of the Book of Job in the Hebrew Bible, as well as a prophet in Islam. The sculpture measures 75” X 38” X 30”.

Job was temporarily uninstalled in 2007 from Herron School of Art & Design’s grounds due to it being a temporarily loaned piece. After nearly a year in 2008, Job was reinstalled due to the support of Jane Fortune, Dr. Robert Hesse, William Fortune Jr. and Joseph Blakley.

Judith Shea was born in 1948. Shea’s work has been shown at the Whitney Biennial and her work is within collection’s of the Whitney Museum of American Art, Metropolitan Museum of Art, Brooklyn Museum, and National Gallery. Shea also has received many awards including, The Rome Prize Fellowship, the Saint-Gaudens Fellowship, and two NEA fellowships for Sculpture.