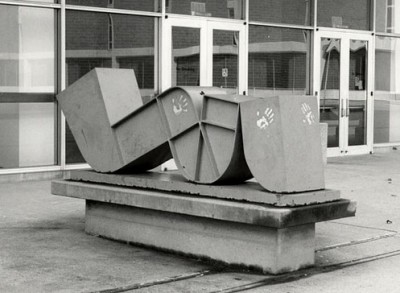 Broken Walrus I, a mild steel sculpture with an orange-red painted matte finish, was an abstracted representation of a single walrus tusk broken into two pieces. Rather than a realistic, round tusk, it had squared edges and exaggerated, squared ends. To portray the sense of brokenness, the work had two pieces: a larger, main tusk and a smaller section resting against it. A black and white photograph of Broken Walrus I appears in the exhibit catalog Gary Freeman: A Decade of Sculpture 1979 to 1989.

From 1975 until it was removed around 2004, Broken Walrus I was located north of New York Street on the IUPUI campus; north of the IUPUI Lecture Hall and west of Joseph T. Taylor Hall (formerly University College) at 815 W. Michigan Street. Artist Brent Gann’s abstract piece, Orange Curves, was installed in the former location of Broken Walrus I. Around 2004 Broken Walrus I was removed and disassembled due to extreme rust. Because it was in great need of repair, IUPUI’s Campus Facility Services approached Valerie Eickmeier, Dean of the Herron School of Art and Design, who contacted Freeman and obtained the artist’s permission to remove and disassemble the sculpture.

Broken Walrus I was displayed outdoors for nearly thirty years, through cycles of harsh, midwestern winters and humid summers, causing the structure to become increasingly corroded until it was more efficient to remove the sculpture rather than repair it.

Note: The hand prints on the sculpture in the image below are not part of the original design.