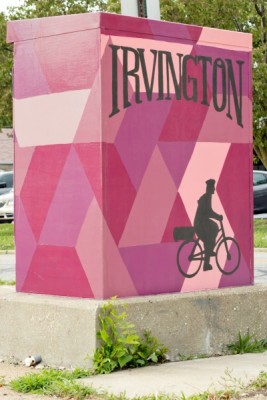 The designs of local artists Morgan Hauth, Shelby Kelley and Andrew Severns were been selected to be featured on traffic signal boxes along Washington Street, transforming Indy’s Eastside. The first project of its kind in Indianapolis, seven traffic signal boxes became a series of public artworks seen by thousands of people daily.

The traffic signal boxes on Washington Street, from Emerson to Edmonson, were painted by volunteers on Saturday, October 20, as part of the Great Indy Cleanup, sponsored by Keep Indianapolis Beautiful, Inc. with support from the Mayor’s office and many local businesses and retailers.

Traffic signal box art along E. Washington St. was created in the theme of a busable, bikeable, walkable Irvington drawing directly on this transit corridor’s past and future. 36,000 cars and trucks travel E. Washington St daily. It is the National Road and former US40.