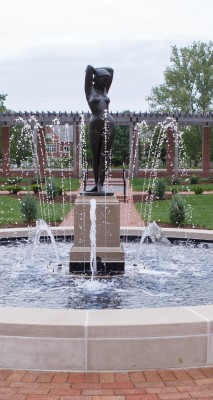 Eve is a sculpture of a nude female figure standing on a circular bronze base which measures 17” in diameter and 2” tall. She is standing with her proper left foot pointed forward and her proper right foot is perpendicular to the left, pointing right. Her arms are crossed behind her head and she is looking down and to her left. Her hairstyle is such that all of her forehead and both of her ears are visible. “Robert Davidson” is visible on the proper left side of the top of the base.

http://www.publicartarchive.org/work/eve#date
Eve was commissioned by the Indiana University Nurses Alumni Association in 1931, was cast in 1932 for its public debut in the Indiana Building of the Chicago World’s Fair in 1933, and appeared in exhibitions around Chicago and Indianapolis before being brought to the IUPUI campus in 1937 and installed in the middle of the fountain in the  Sunken Garden behind the Ball Residence Hall for IUPUI’s student nurses.  The students affectionately called her “Flo” (for Florence Nightingale) and had a tradition of dressing the sculpture in a pink uniform for the pinning (graduation) ceremonies that took place in the Sunken Garden until the 1960s; later generations of IUPUI students continued to dress her in various costumes.  The entire Ball Gardens complex deteriorated from lack of maintenance starting in the 1980s.  Eve was removed for safekeeping in 1997 and was temporarily reinstalled inside the HITS building.  Ball Gardens is currently undergoing restoration and is set to reopen in summer 2016, at which point Eve will be restored to its original location as the fountain’s centerpiece.

Robert Davidson, the artist, was a student at the John Herron Art Institute (now the Herron School of Art, IUPUI) at the time Eve was commissioned. He was a native of Indianapolis and had attended Shortridge High School.  Eve was sculpted while Davidson was studying in Germany and was cast in Munich in 1932 by Priessman, Bruer and Company.