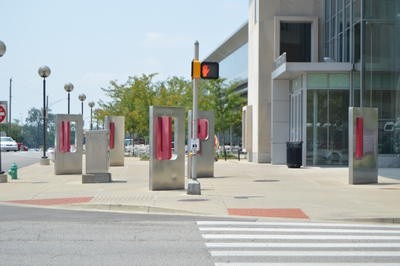 Untitled (IUPUI Letters) consists of a group of five letters spelling out IUPUI, the acronym for Indiana University-Purdue University Indianapolis. The five sculpture pieces have been installed at an angle from one another with several feet between each letter. The sculpture can be viewed as individual letters of the alphabet or together as one large group. The letter enclosures sit perpendicular to the full cabinets, giving each letter a multidimensional appearance.

TwoTwelve is a public information design firm based in New York City, also known as 212 / Harakawa Inc.  The artwork was designed as part of the original construction of the IUPUI Campus Center as a wayfinding device and was fabricated by ASI Modulex of Indianapolis.

Additional information is available at https://en.wikipedia.org/wiki/Untitled_(IUPUI_Letters)