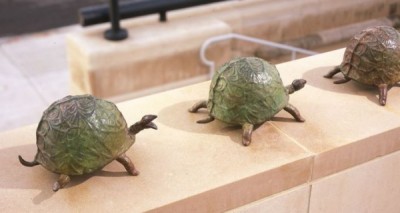 U.S. Army Camp Atterbury opened in 1942 on 40,351 acres of land in Johnson County. The base served as the training ground for 257,000 soldiers during World War II. As a portion of this land gradually became acquired by the state for recreation, it became a popular center for wildlife lovers, sportsman, picnickers and hikers.

This unique piece depicts the helmet-like shells of three marching turtles. The shells of the turtles were cast from actual military helmets. The greenish-brown coloring captures the essence of both a turtle and helmets.

Designers Jeff Laramore and David Jemerson Young of 2nd Globe, an Indianapolis–based artistic company, designed all 92 of the county sculptures featured on the outside of the Indiana State Museum. Their designs narrate the counties’ famous natives, historically significant events, or their cultural heritage, and were fabricated and installed by various Indiana sculptors, carvers, glassworkers, metal workers, and other artisans.