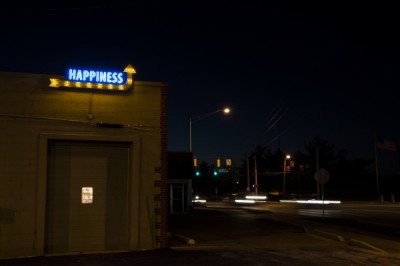 ESL-Spectrum, a lighting design company, commissioned Indianapolis artist Jamie Pawlus, known for her quirky takes on signage in the everyday environment, to create an artwork for their building. The result, Happiness, simply states a directive of the word — reinforced by an arrow pointing to the sky — to motorists and pedestrians passing below it. Using neon and running lights, Pawlus chose an aesthetic reminiscent of the 1950s. The result is a piece that offers a myriad of interpretations to viewers.

The vintage feel of the sign suggests an era that people often nostalgically recall as a golden age of American prosperity and optimism. The moving lights and arrow, in signage code, also point westward, another nod to the 19th century popular notion that the future of America relies on expanding in that direction. In the specific context of Indianapolis, to the west is the Indianapolis Motor Speedway, an economic engine for the city and the source of its worldwide fame.  And of course, there is the more personal suggestion, that happiness is a singular path for each individual.

With these  various interpretations and so many more, Pawlus is making a complex conceptual statement about how we as a culture have defined and searched for happiness, perhaps only to find it in our own backyard.

Jamie Pawlus is an Indianapolis-based artist.