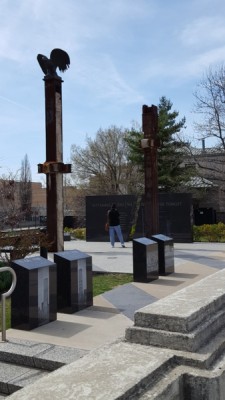 The 9/11 Memorial was dedicated exactly ten years after the historical events to honor those killed in the terrorist attacks of September 11, 2001 in New York City.  The memorial, which is set overlooking the Downtown Canal, contains two 11,000-pound beams from the World Trade Center’s twin towers that were destroyed in the attacks; a pair of six-foot tall black granite walls inscribed with remembrances of the events in New York City, Washington, D.C., and Shanksville, Pennsylvania; four smaller granite markers inscribed with images and descriptions of four key events of September 11 and the times they occurred; and a bronze, life-size sculpture of an American bald eagle perched on one of the beams, with wings outstretched and gazing east in the direction of the events of that tragic day.  There are also four benches in the plaza, which are replicas of benches in the World Trade Center plaza, and seven Indiana native flowering trees, symbolizing the seven buildings of the World Trade Center complex.  A specimen redbud tree stands directly opposite the granite wall as a Freedom Tree, its bold color representing the resolve of the American spirit.  The granite wall has a large, jagged gap between its two halves, to symbolize the United States being torn apart on September 11, 2001.  Inscriptions on the wall and around the memorial highlight the emotions felt on that day and expressions of hope and unity.

The memorial was the culmination of Project 9/11, an effort by Indianapolis resident and firefighter/paramedic Greg Hess.  Hess had served on Indiana Task Force 1, one of the first emergency responder teams to arrive at the site of the terrorist attacks to assist local teams with rescue and recovery. The memorial was produced entirely through private donations and in-kind contributions.

The plaza and its elements were designed by Bill Cotterman of Gibraltar Design, Inc.  His intention was to recreate, both emotionally and symbolically, the experience of being at the World Trade Center site.  Sculptor Ryan Feeney, who is also an Indianapolis firefighter, and his co-worker Donald Mee created the bronze eagle.