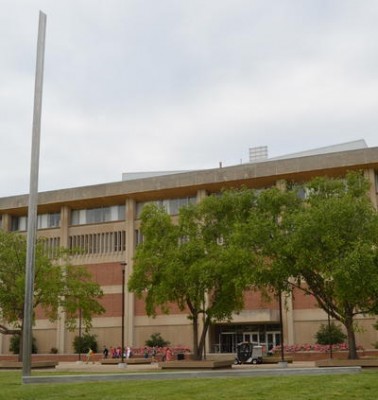 Untitled (L’s) is a public sculpture by American artist David Von Schlegell. The sculpture is located on the campus of Indiana University-Purdue University, Indianapolis (IUPUI) near downtown Indianapolis, Indiana. Untitled (L’s) was created in 1978, installed in 1980, and dedicated on October 7, 1980. The Minimalist sculpture is composed of three identical steel L’s that were fabricated by a yacht manufacturer in New York. Each component has a steel core with an outer layer of brushed stainless steel that reveals its texture when light reflects off of the surface.

Untitled (L’s) was selected from 100 submissions to be accessioned into IUPUI’s permanent collection, an artist challenge suggested by former IUPUI Faculty Council Secretary, Phillis Danielson. Based on the Pythagorean Theorem of geometry, the University believed that Untitled (L’s) represented the tradition of math, logic, and wisdom at IUPUI. Untitled (L’s) was commissioned with partial funding from the National Endowment for the Arts (NEA) under the “Works of Art for Public Spaces” program while the rest of the funding came from private sources. The project took five years to complete.

David Von Schlegell (1920-1992) was born in St. Louis, Missouri and studied at the University of Michigan before entering the Air Force. As a member of the Arts Students League in New York, Von Schlegell rose to prominence in the 1960s as a sculptor. Working primarily in aluminum, steel, and wood, Von Schlegell was inspired by his wartime experience as an aircraft engineer. In addition to sculpture, Von Schlegell also practiced drawing and painting.