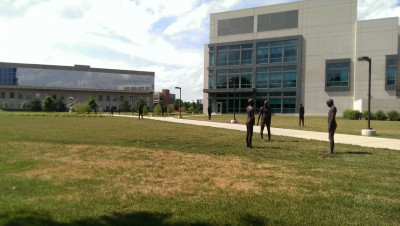 Horizons is an installation that encompasses 12 life-sized, cast-iron androgynous figures, each embedded with horizontal lines of glass. The rough surface of these sculptures echoes the texture of the tree trunks, while bands of transparent glass allow the daylight to show through their lean bodies. The use of iron, which ages and weathers to develop a patina over time, connects the work to its natural environment.  Since its creation, the group has previously been installed in such contexts as fields, forests, galleries, and gardens.  The distance and relationship of the figures to each other and to the viewer change with each new installation.

According to the artist, the glass lines are meant to evoke the endless horizon she sees at her oceanside studio, the line where sky meets sea.  “Glass as a material has a lot of different connotations. It can be fragile, yet dangerous. It can be translucent, or solid . . . It’s like water, but also like air.”

The exhibit was showcased in the documentary Horizons: The Art of Steinunn Thórarinsdóttir directed by Frank Cantor and featuring music by Björk. The film, exploring the human condition through Steinunn’s work, was awarded a Cine Golden Eagle, Special Jury and Masters Award from the International Cine Festival in Washington, D.C. in 2009.

Steinunn Thórarinsdóttir (pronounced Stay-nun Thorens-daughter) is an Icelandic artist who has used the human form as her main means of expression throughout her career. She works with reliefs and free standing sculpture in various materials such as cast iron, aluminum, plaster, glass and concrete. Thórarinsdóttir has done numerous commissions both for specific indoor spaces as well as outdoor works and monuments. She has been working professionally for over 30 years and has exhibited widely in Europe, Japan, USA and Australia. Her works are in private, public and corporate collections worldwide. She currently lives and works in Reykjavik, Iceland.  Read more about her work at http://www.steinunnth.com/