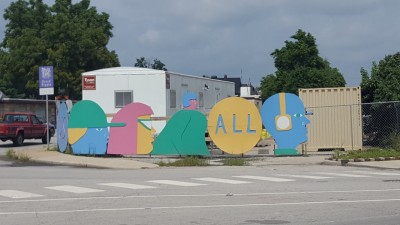 Indianapolis-based artist Nathaniel Russell was commissioned by Milhaus, a local development company, to create a dimensional art fence/mural around the temporary construction site near the intersection of College and Massachusetts Avenues. The purpose was to obscure some of the unsightly construction equipment while making a work that addressed the changing neighborhood and Mass Ave community.  Its deliberately naive style and simple shapes were both disarming and endearing.

Nathaniel Russell was born and raised in Indiana. After graduating from college, Russell spent several years in the San Francisco Bay Area making posters, record covers, and woodcuts. He returned to his home city of Indianapolis and now spends his time creating drawings, fake fliers, bad sculptures, wood shapes, and music. Russell’s work is regularly shown around the world in both traditional galleries and informal spaces, usually surrounded by an expanding list of friends, collaborators, and like-minded folk. He frequently returns to his second home of California to work with friends on projects as varied as murals, print workshops, and backyard musical performances.  Russell was a guest artist on the PBS Digital series The Art Assignment in 2015 for his “fake flyer” work.  Read more about Russell’s work at http://nathanielrussell.com/