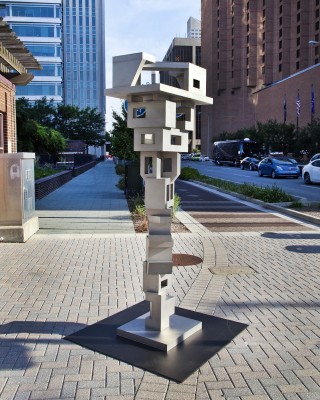 The artist, Don Gummer, was born in Louisville, Kentucky in 1946. When he was seven years old Gummer and his family moved to Indianapolis, Indiana. As he grew up in Indianapolis he attended Ben Davis High School where he demonstrated his artistic talent by winning local awards. Gummer attended Herron School of Art in Indianapolis before moving to Boston, Massachusetts to attend School of the Museum of Fine Arts. From Boston, he went on to Yale University in New Haven, Connecticut, where he completed both his Bachelor of Fine Art and his Masters of Fine Arts.

Gummer prefers that each individual bring their own interpretation to Desert House and his other sculptures along the Cultural Trail.  Don Gummer: Back Home Again runs from August 31, 2016 to August 7, 2017.