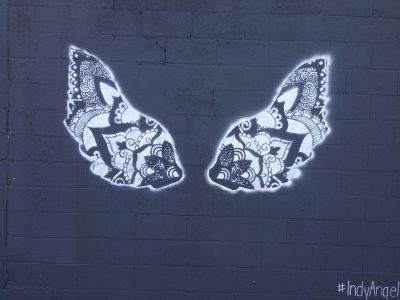 This mural at DeveloperTown is one of two similar sets of street-art interventions by Indianapolis artists Megan Jefferson and Jamie Locke.  Initially created in the summer of 2016, the murals are Jefferson’s attempt to infuse hope and love into public spaces of the city.  Their interactive nature (many people share photos of themselves standing in front of the wings, seen at #indyangelwings) and positive spirit are intended to provide a bright spot in one’s day.

Two other sets of Jefferson and Locke’s angel wings, in full color at both adult and child heights, are located further north along the Monon Trail at 64th St. in Broad Ripple.  Angel wings “graffiti” are seen in many cities in the U.S., done for similar reasons.

Megan Jefferson is one of the artists in the collaborative known as the Department of Public Words, whose mission is to spread positivity through word-based murals and interactive projects in public places.

Learn more about the group at: http://www.dpwords.org/main/

Jamie Locke is a resident artist at Ruckus Makerspace.  Her work usually takes the form of intricate mandalas (spiritual maps) in both two-dimensional and three-dimensional media. Learn more about Locke’s work at: http://www.jamielockeart.com/