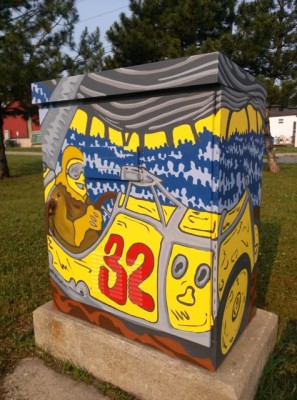 This traffic signal box is located on the southwest corner of Harding and Howard street. The artist, Brandon Fields, uses expressive lines to show the fluidity of a race car’s motion. You can almost hear the noise, feel the vibrations, and energy associated with the sport of racing from just looking at this depiction of this single racer who is seated in his bright yellow racecar and surrounded by a crowd of blue silhouetted figures. The piece is located near the site of the factory that produced the Marmon Wasp, the car that won the first Indianapolis 500 race.