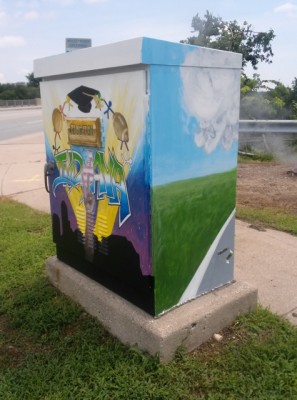 Every Engine Has a Key

Art teacher Michael Schulbaum coordinated a competition for students at the Key Learning Community, where the box is located, in order to select and refine the design for this artwork.  The winning design was by 5th grade student Jalen Washington Cordell, showing a brain on wheels heading down the “Education Highway,” expressing the idea of the brain as an engine that takes you anywhere you want to go, and it only needs to be “turned on”.  This design wraps three sides, with the fourth side (facing the street) a combination of several students’ design ideas expressing pride in the Indianapolis Public Schools system. Schulbaum transferred the students’ designs to the box and painted them.

Key Learning Community was a K-12 specialty school, the first in the world to be organized around educating students through theorist Howard Gardner’s “multiple intelligences” concept, until it was closed at the end of the 2015-2016 school year and refocused into a K-8 arts magnet school.