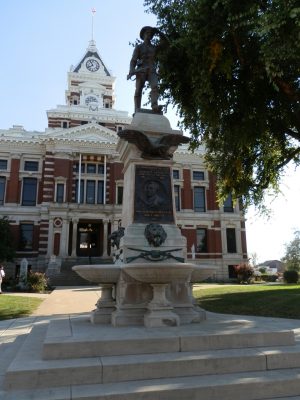 John Terrell Vawter (born January 15, 1830) was a businessman-banker from Franklin, Johnson County, Indiana. He donated the Civil War memorial monument, known as the Vawter Memorial, which features a sculpture by Rudolph Schwarz. The monument is located on the north lawn of the Johnson County Courthouse square in Franklin, Indiana.

The memorial features a sculpture of a standing male Union soldier, high atop a pedestal. He holds a rifle in his proper right hand and his proper left hand is shading his eyes as he looks into the distance. Weaponry includes a revolver on the proper right hip, a sword on the proper left hip, and a cartridge box on the belt. On the front of the pedestal in relief is a bronze eagle and a portrait of John T. Vawter, and on the rear is a flag. All four sides have bronze lions’ heads, which issue water into a semi-circular fountain basin.

Rudolf Schwarz (June 1866 – 14 April 1912) was an Austrian-born American sculptor. Schwarz emigrated to Indianapolis in December of 1897 to help complete the Soldiers’ and Sailors’ Monument, which was designed by German architect Bruno Schmitz. He lived a simple life, almost secluded, and was not well known by the public. For the last seven years of his life, however, Schwarz created and directed a class in sculpture at the John Herron Art School, now Herron School of Art and Design. Schwarz is known from at least 30 sculptural works throughout the state of Indiana, many of which are war memorials.