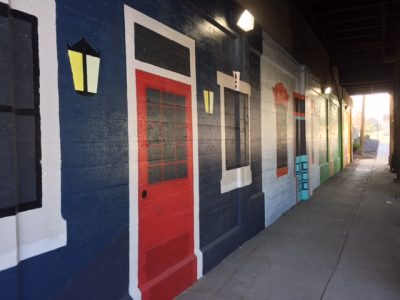 Cottages of the Near Eastside / A Crossing Through...

The two sides of this simply-painted underpass mural highlight two of Indianapolis’ oldest Eastside residential areas.  These neighborhoods were once home to the thousands of immigrants that flooded into Indianapolis during the late 19th and early 20th centuries in search of a fresh start.

Cottages of the Near Eastside, on the east wall of the underpass, showcases the facades of homes in the Holy Cross, Cottage Home and Windsor Park neighborhoods as well as in Fountain Square and irish Hill on the Southeast side.  if you are familiar with the area, you can pick out the individual houses represented.

A Crossing through Irish Hill, on the west wall, depicts the history of the rail industry in Indianapolis since service first began in the mid-1800s. The Irish Hill neighborhood developed concurrently with the railway, and was historically considered one of the Midwest’s strongest Irish-American communities.

The artist, Jarryd Foreman, is an Indianapolis-based graphic and advertising designer.  At the time of the mural’s commissioning, he worked for Angie’s List, headquartered adjacent to Irish Hill.