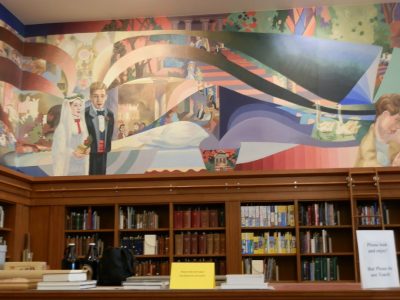 The Book of Life

The full title of this mural is The Book of Life: The People We Know, the Experiences We Have, and the Conditions under Which We Live.  Located on the 6th floor of the Indianapolis/Marion County Library, Central Branch, the mural is appropriately placed in the Indiana Room, where readers can find special editions of books by Indiana authors and rare material about the history and geography of Indiana.  The Indiana Room is typically kept locked, so to view the full mural, visitors must find a librarian to unlock it.

The mural was inspired by Booth Tarkington’s novel The Magnificent Ambersons, which was written in 1919 and depicts the fortunes of three generations of one Indianapolis family from the Civil War into the early 20th century.  Torluemke spent a year painting this interpretation of the period covered in the book as well as other eras in Indiana history.  “This mural was loosely inspired by the novel in that it chronicles the social and economic development of Indianapolis, the lives of some of the prominent citizens in that city and their families, and many of the trials and tribulations experienced by these people. It has always been my hope that after I created this mural, viewers could identify images and events in it that in significant ways parallel the happenings in our own time.”  (quoted from the artist’s website, http://www.tomtorluemke.com/murals/murals.html, retrieved 12/19/2016)

The mural is painted on canvas panels and attached to the wall with an adhesive.  For more about the mural and its installation, visit http://www.indypl.org/readersconnection/?p=1058

Tom Torluemke was born and raised in Chicago but spent most of his adult life in northwestern Indiana.  He works prolifically in a variety of media, including mural painting, stage design, mosaics, oil and acrylic painting, watercolor and sculpture. With over 20 public art commissions throughout the Midwest, the relevance and scope of Torluemke’s ideas, as well as his ability to present them in a meaningful context within their communities, makes him a sought-after artist.  Read more about Torluemke at http://www.tomtorluemke.com/main.html.