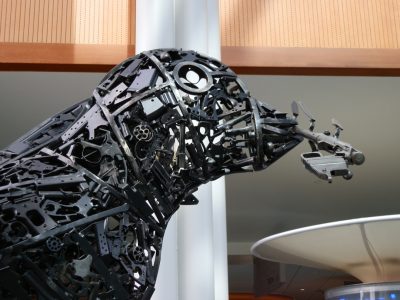 Peace Dove was a commissioned project by artist and professional firefighter Ryan Feeney.  By 2014, Marion County Sheriff John Layton had been so moved by the sheer amount of gun violence in the city that he felt he needed to facilitate a memorial.   He turned to Feeney, and allowed him access to the sheriff’s stockpile of confiscated and destroyed gun parts. Feeney designed and fabricated a sculpture of a dove, made entirely from these gun parts, to raise awareness of gun violence and the needs of surviving family members. The intention is to allow families and friends of victims to gather together at the sculpture in mutual grief and support.

Peace Dove is installed temporarily in the lobby of the Central Library until a permanent home can be found for it somewhere in the city. At the moment, it serves as an icon for the Library’s Stand4Peace initiative, which aims to open dialogue about violence in Indianapolis and help local youth think carefully about its causes and effects.  For more information about Stand4Peace, visit here.

Ryan Feeney is the owner of Indy Art Forge, and calls himself a “modern-day blacksmith.”  He attended Miami University of Ohio, earning a B.F.A. in Sculpture and Graphic Design.  Feeney is also a full-time firefighter with the Indianapolis Fire Department. He has completed several public art commissions in Indianapolis, including the 2017 sculpture of Peyton Manning located at Lucas Oil Stadium.  Learn more about Feeney at http://www.indyartforge.com