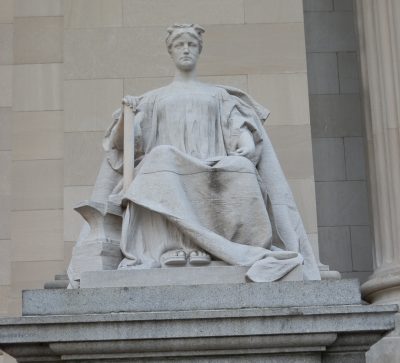 These four allegorical figures appear on the south exterior of the Birch Bayh Federal Building and U.S. Courthouse (formerly the U.S. Courthouse and Post Office), and represent four of the foundations of American society.  They flank the building’s two entry pavilions.  The figures were carved by J. (John) Massey Rhind (1860-1936) in 1906.

Agriculture is depicted as a seated, classically-draped female figure holding a scythe in her proper left hand and a sheaf of wheat in her proper right hand.

Industry is depicted as a seated, classically-draped female figure holding a hammer and with an anvil at her proper right side.

Justice is depicted as a seated, classically-draped female figure holding a sword in her proper left hand.

Literature is depicted as a seated, classically-draped female figure with an open book on her lap and a rolled scroll in her proper left hand.

The Federal Building and U.S. Courthouse is a distinguished example of Beaux Arts architecture, typical of the 19th and early 20th centuries for public buildings. Begun in 1902 and completed in 1905, the U-shaped structure occupied an entire block, rose four stories, and housed federal courts, offices, and the main post office. The Federal Building and U.S. Courthouse inspired Beaux Arts designs for other public buildings in Indianapolis, including City Hall (1910), the Indianapolis-Marion County Public Library (1917), and buildings in the Indiana World War Memorial Plaza (dedicated in 1927). In 1974, the Federal Building and U.S. Courthouse was listed in the National Register of Historic Places.  For more information about the building, visit the General Services Administration’s website.

Rhind was born in Edinburgh, Scotland.  He studied art with his father, a renowned sculptor, and at the Royal Scottish Academy in addition to private lessons with the French artist Jules Dalou in Lambeth, England.  Rhind emigrated to the U.S. in 1889 and settled in New York City, moving to New Jersey ten years later to set up his own studio.  He was very prolific, and well known for his free-standing portrait sculptures, some of which are in the U.S. Capitol, fountain sculptures, and architectural enhancements for public structures, including monuments, courthouses, commercial establishments, and churches.  Read more about Rhind at https://en.wikipedia.org/wiki/J._Massey_Rhind