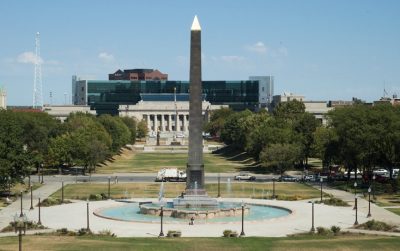 Veteran’s Memorial Plaza, once known as Obelisk Square, is located immediately north of the Indiana War Memorial. The Obelisk and Fountain rise from the center of the plaza, while flagpoles bearing the flags of each of the 50 United States stand on the east and west sides. Completed in 1930, the park was originally a broad concrete square, but was converted into a landscaped park with trees in 1976 as part of the celebration of America’s Bicentennial. In 2004, the park was again reconfigured to return the ‘line of sight’ aspect of the original architects’ plan. Large ordinance pieces, including tanks and eight World War I German cannons, originally sat at the outside corners of the plaza. During World War II, six of the cannons were melted down for scrap metal. The remaining cannons were moved to new locations when the plaza was converted into a park in the mid-1970s.

Centrally located in the plaza are the Obelisk and Fountain. The Obelisk is a 100-foot shaft of black Berwick granite, ornamented at its base with four bronze bas-relief tablets, each four by eight feet. The Obelisk represents “the hopes and aspirations of the nation, a symbol of the power of nature to reproduce and continue the life of the country.” The tablets represent the four fundamentals on which the nation’s hopes are founded: Law, Science, Religion, and Education. They were set into place in the fall of 1929 under the supervision of Henry Hering, the primary sculptor of the plaza. The pinnacle of the Obelisk is covered with gold leaf. The fountain is 100 feet in diameter and made from pink Georgia marble and terrazzo.

Henry Hering (1874-1949) was a New York-based architectural sculptor well known for his allegorical figures in traditional Beaux Arts and Art Deco style.  His work can be found in most major U.S. cities.