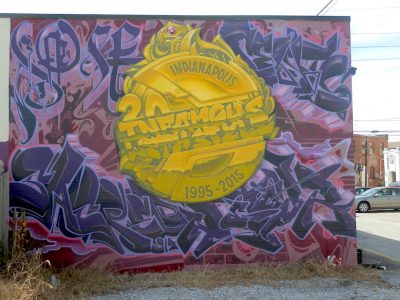 Dose, Sacred, 6Cents, and Detour are local graffiti artists who make up part of the Infamous with Style (IWS) crew. This 20th Anniversary medallion represents the group’s long-term career as bright, bold, and dynamic group of artists working together.

Founded in 1995 by Dose and Creep, IWS was one of the original Indianapolis graffiti crews. At various times, IWS had members from NUA, KA, HFX and S2L, all graffiti crews that had previously worked in Indianapolis. Without the necessary leadership, however, each member eventually dropped out of IWS and the group disbanded. In 2004, IWS reorganized and refocused their goals: to create pieces, raise the bar as much as possible, and have no leader. Since then, IWS has produced several murals and commissions, proving that every graffiti writer needs a good partner with similar goals and tastes.