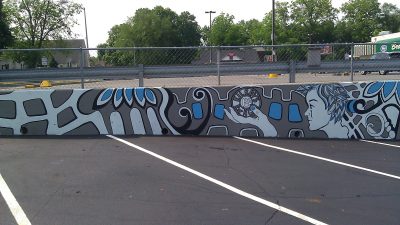 The imagery of this mural reflects the vibrant atmosphere of Broad Ripple Village, particularly its youth culture. It was painted in 2012 to help prevent tagging of the wall by providing something fun and interesting to look at.  The Kilroy’s logo appears along with the “Kilroy” character, a bald man seen as if peeking over the logo.  The limited color palette gives it an intriguing graphic look.

The character of “Kilroy” dates back to World War II, where it was a common graffiti image drawn by American GI’s in Europe.  It originated simply with the phrase “Kilroy Was Here,” possibly derived from a military legend, and used as a joking way of indicating that the GI’s had passed through.  The accompanying image became linked to the phrase after contact with British soldiers, and was likely derived from their own ubiquitous graffiti character they called “Mr. Chad.”

The artist, Barbara Stahl, has been painting murals in Indianapolis since the early 1990s, in addition to creating fine art as a studio artist.