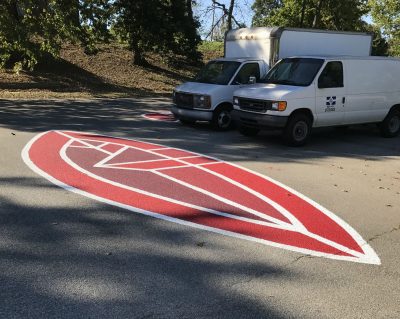 As part of the 2017 Indy Do Day, Indianapolis’ It’s My City coalition partnered with local artists and volunteers to create temporary and semi-permanent pavement murals throughout Indianapolis.  Most of the murals were made of chalk and were designed to last just a few days, but as part of its neighborhood engagement efforts, Big Car Collaborative worked with artists to create murals in the Garfield Park neighborhood that would stay fresh-looking for up to a year.

Indianapolis-based artist William Denton Ray painted this mural for the Garfield Park Art Center in its large parking lot, originally the site of a swimming pool when the park was first built.  The mural includes four 30′ x 10′ stylized leaves that are designed to be graphic in nature and also provide a visual direction towards the Art Center’s entrance, which can be difficult for patrons to find. The original design was a teal-green color; however, after the artist discussed the palette with the Friends of Garfield Park, the decision was made to change it to shades of red. The design was laid out by the artist and filled in by the staff of local digital marketing company Trendy Minds, with additional volunteers from Eli Lilly as part of the Lilly Global Day of Service on September 28.   To finalize the design, Ray painted the white outlines to make all the reds pop.