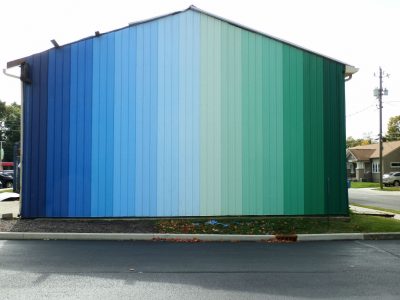 This mural was designed by Indianapolis artist Megan Jefferson and completed by Megan and Corey Jefferson and Holly and Dave Combs as a Department of Public Words project. It was commissioned by TCC Software Solutions.

The artist thinks of this mural as a visual representation of a breath. It is inspired by both the green grass below the mural and the blue sky above. There is a bit of a “secret” message on each end of the mural. In binary code, one side says “technology” – representing TCC and their focus on software solutions, and the other end says “community” – representing the focus of DPWords’ work.