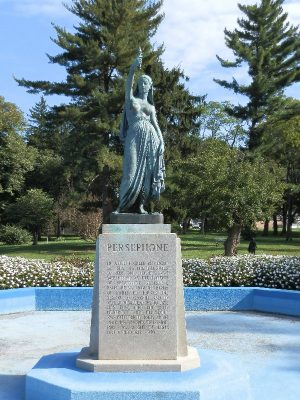 This bronze figure of the Greek goddess Persephone stands on a raised platform in the center of an octagonal pool.  Her right hand is elevated, holding a torch.  The figure is draped from the waist down and has a draped headdress flowing down the back of the sculpture.  A plaque on the front of the statue reads:  “In Ancient Greek Mythology, She, as the daughter of Zeus, and Demeter, was worshipped as the goddess of vegetation.  Returning each spring from the realm of Hades to herald the season of growth and in winter disappearing to pass her time like the seed under the earth.”

The torch in the figure’s hand indicates that she is on her way up from the dark underworld to the light of the world, and indicates a forthcoming season of spring and hope. The symbolism is common to that of the Eleusinian Mysteries, a cult of Demeter and Persephone that was a highly secretive religious ritual often enacted by women, possibly as a coming-of-age rite for young girls or an exploration of the concept of eternal life. The figure also holds a set of ropes with bells on the end, which could refer to another element of the ritual.

Another plaque nearby states that the pond is called Persephone Pond and was restored in 2014 as a gift from the class of 2012 and Butler University.