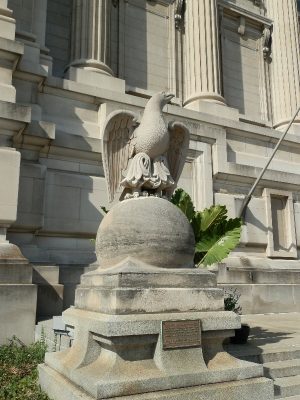 Some historic architectural details that look intentional weren’t necessarily part of a building’s original plan. A good example of this is the pair of eagles atop globes outside the entrance of Old City Hall in Indianapolis. While they look quite striking in their current home, they’re actually the only surviving remnants of the Indianapolis Traction Terminal train shed, a major interurban train station in downtown Indianapolis that functioned from 1904 to 1941.

The limestone pair flanked the train shed near the corner of Market and Illinois Streets. The shed had nine tracks that, at the Terminal’s peak, handled 500 trains per day and seven million passengers per year. It was the largest interurban station in the world at the time. When interurban service ended in 1941, the tracks were paved over and the terminal remained in use until 1968. At that point, the shed was dismantled; the eagles were removed and then relocated to their current home at Old City Hall.

From the plaque on the statue base:

“Indiana Limestone Eagle and Globe
Which once graced the World-Famous Interurban Traction Terminal, built in Indianapolis in 1904 and razed in 1968 as the site of the Blue Cross and Blue Shield Building
Presented to the Indiana State Museum on Nov. 15, 1968
by Indiana Blue Cross and Blue Shield
as a memento of the Golden Age of Interurban Transportation”