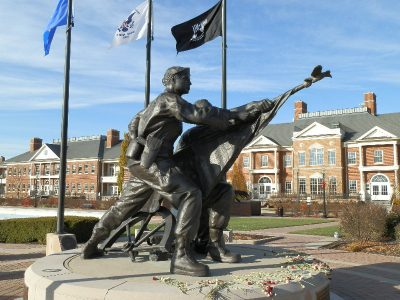 This over-life-sized sculpture of two kneeling soldiers, a man and a woman, shows them as if they were on a battlefield and have just picked up an American flag.  They seem windblown, as if they are fighting the weather along with other hardships in order to move forward.  Eight flags–one for each of the five uniformed military services as well as the U.S. flag, the Indiana flag, and the POW/MIA flag–fly at the site.  Six plaques with inspirational quotes surround the pedestal; the quote authors are Presidents Lincoln, Jefferson, Eisenhower and Reagan, philosopher Edmund Burke, and aviator Amelia Earhart.  A reflecting pool, common to many memorials, completes the layout.

The memorial honors American veterans of all wars, all periods, anywhere. The figures are wearing late 20th century military dress, but historic battlefield artifacts are represented to signify the historic aspects of the monument.

The sculpture was created in 2006 by Terre Haute, IN artist Bill Wolfe, who won a design competition in order to receive the commission.  The project was first initiated in 1999.