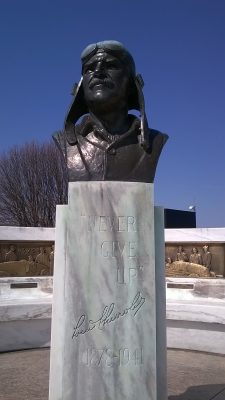 This memorial, also known as Founders Plaza, features a bust of Louis Chevrolet on a pedestal in front of a curved marble seating area with four bronze reliefs of some of the founders of the car/racing industry, including Henry Ford (1923); Gaston Chevrolet (1920); Tommy Milton (1921); and Louis Chevrolet (1911).

The memorial, designed by Fred Wellman and sculpted by Adolph Wolter, was created during 1968–1970 and installed in the spring of 1975. Wellman conceived his idea for a Louis Chevrolet memorial in 1964 after visiting Chevrolet’s grave in the Holy Cross and St. Joseph Cemetery in Indianapolis, and realized that he was under-recognized for his contributions to the auto and racing industries.

The centerpiece of the memorial is a bronze bust of Chevrolet wearing a racing cap and goggles; it rests on a marble and granite square base.  The relief panels show Chevrolet and William C. Durant, founder of General Motors, with the first Chevrolet Classic Six touring car in 1911; Chevrolet’s first winning car at Indianapolis 500 in 1920, driven by his brother Gaston, with four Speedway pioneers in the background, Carl G. Fisher, James A. Allison, Lem H. Trotter and T. E. (Pop) Meyers; Chevrolet’s second Indianapolis winner in 1921, driven by Tommy Milton, with Capt. Edward V. Rickenbacker, Col. Arthur W. Herrington, Louis Schwitzer, and Cornelius W. Van Ranst; and Chevrolet’s 1923 Barber-Warnock Fronty-Ford, which placed fifth driven by L. L. Corum, with Henry Ford at the wheel, flanked by Barney Oldfield, Chevrolet, and Harvey Firestone.