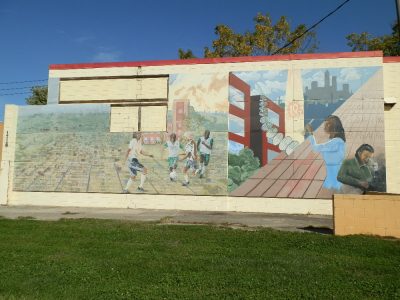 The left half of this mural celebrates the nearby historic campus of Arsenal Technical High School (“Tech”) as the center of the Near Eastside.  Many of the campus’ buildings date to the Civil War period, when it was built as an arsenal for the Union army.  Converted to a high school in 1912, the campus became host to a comprehensive academic and vocational education program that was also known for strengths in the arts, graduating many famous individuals including jazz musician Freddie Hubbard, artist Robert Indiana (Robert Clark), and U.S. Congressman Andre Carson.

The left half of the mural shows the backdrop of downtown Indianapolis with the Near Eastside and the high school in the foreground, as if it were a field on which several overscaled soccer players contest for a ball.  The right half of the mural shows newer Arsenal campus buildings and two students in a science lab with a DNA helix, arranged along a brick path that leads to another image of downtown Indianapolis.  Missing panels on the left once continued the images of the Tech campus and the Downtown skyline.

The artist, Indianapolis painter Morris Kurz, chose Tech as the theme in order to inspire local youth to think of the opportunities provided by education as the key to a good life. He depicted the figures as African American and Latinx to indicate that a quality education is accessible to all.  The soccer players not only provide a sense of movement to the mural, but were painted as a symbol of beneficial physical activity and the idea that working collaboratively as a team is another way to succeed in life. Originally there was to be text proclaiming “Gateway to the Near Eastside,” but it was never implemented.

Kurz created the mural in 4’ x 8’ sections on cement board in his garage, because the property owner did not want anything permanent on the building.  The cement board proved to be too delicate for this type of installation, and periodically would fall off the building.  After several replacements, it was decided to leave the installation alone, resulting in an irregular appearance.

Despite a campaign by neighbors to remove and relocate the remaining sections, the mural was destroyed in 2018 when the building to which it was attached was demolished.