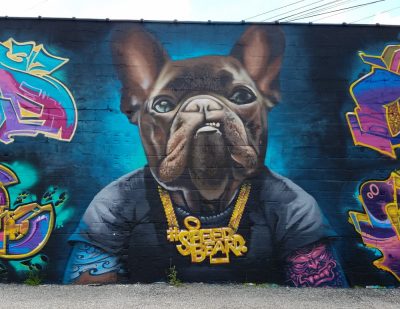 This mural is a tribute to the Cincinnati-based, nationally-known graffiti/street artist Speedbeard (Jason Brunson, aka RAPES), who passed away suddenly in 2017.  It’s a portrait of Speedbeard’s pet French bulldog, the inspiration behind many of his characters. Frenchie is wearing a black T-shirt, as Speedbeard habitually did, and has parodies of Speedbeard’s full-sleeve tattoos.

The artist was called Speedbeard because he painted quickly and sported a characteristic beard.  As Jason Brunson, Speedbeard was an in-demand artist in his family’s tattoo parlor in Cincinnati and was also a skateboarder. His other work in Indianapolis is mostly letter pieces of the word RAPES, although his work in Cincinnati includes characters.

The mural was painted by Fab Crew with the graffiti artist Gamble, an Indy native who lives in Cincinnati. Dan Thompson of Fab Crew remarked that Speedbeard was a pillar of the graffiti community, known and admired by all.